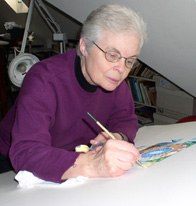 There are seven short verses sung before the Magnificat during the official Evening Prayer of the Church on the seven days before the vigil of Christmas. They each begin with the exclamation “O”. Each of them ends with a plea for the Messiah to come.

These O Antiphons, as they are known, were composed in the seventh or eighth century when monks put together texts from the Old Testament which looked forward to the coming of our salvation. They form a rich mosaic of scriptural images, and became very popular in the Middle Ages. While the monastic choirs sang the antiphons, the great bells of the church were rung.

An interesting feature of these antiphons is that the first letter of each invocation may be taken from the Latin to form an acrostic in reverse. The first letters of these Latin words spell out the response of Christ himself to the heartfelt prayer of the people: “Tomorrow I will be there”.

This is the paradox and mystery of of Advent: that we gather in anticipation of the coming of the God who is already with us at every moment.

Artist Ansgar Holmberg, CSJ, has painted a series on the O Antiphons:

O Wisdom, O holy Word of God, you govern all creation with your strong yet tender care. Come and show your people the way to salvation.

O Adonai, sacred One of ancient Israel, who showed yourself to Moses in the burning bush, who gave him the holy way on Sinai mountain; come, stretch out your mighty hand to set us free.

O Flower of Jesse’s stem, you have been raised up as a sign for all peoples; rulers stand silent in your presence; the nations bow down in worship before you. Come, let nothing keep you from coming to our aid.

O Key of David, O royal Power of Israel opening at your will the gate of heaven: come break down the prison walls of death for those who dwell in darkness and the shadow of death; and lead your captive people into freedom.

O Radiant Dawn, splendour of eternal light, sun of justice: come, shine on those who dwell in darkness and the shadow of death.

O Ruler of all the nations, the only joy of every human heart; O Keystone of the mighty arch of humankind, come and save the creatures you fashioned from the dust.

O Emmanuel, ruler and lawgiver, desire of the nations, Saviour of all people, come and set us free, Our God.