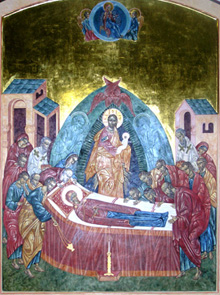 Imagine working on an art project for 300 to 400 hours! And one that is four feet by five and a half feet! That’s how much time Sister Kathleen Holmberg spent doing the icon pictured here. Over a year and a half ago, Father John Malone of Assumption Parish in downtown St. Paul spoke with Kathleen about doing an icon of the Assumption of Mary for his parish. This would be a memorial for a deceased member of the parish. So started the journey!

Before writing an icon (the term for the painting of one), there is a lot of preparation. Research into the history of an icon that would depict the feast was but one part of it. Lech Palowski of West St. Paul laminated the pieces of basswood and beveled the shape for it to fit into its space in the church. His wife, Elzbieta, continued the preparation, putting a layer of fabric on the wood surface and then priming it with ten layers of gesso (a mixture of powdered chalk and marble dust mixed with rabbit skin glue). Elzbieta also applied the 23 carat gold leaf any place it would be in the painting. In the meantime, Kathleen researched which traditional Russian or Byzantine portrayal of Mary’s Dormition she would do. She settled on one, and after drawing the sketch, she enlarged it at Kinko’s (not available to ancient iconographers!). She then etched the design into the gesso and proceeded with the painting. Paint is put on the figures in layers, an average of eight to ten being common. Most pigments she uses are of natural materials, powdered (as MN pipestone) and then mixed with egg yolk and water. 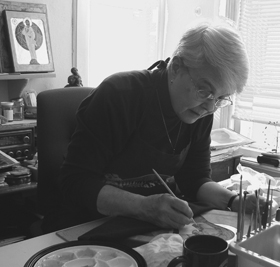 (Kathleen Holmberg in her studio)

Kathleen’s interest in icons goes back to her introduction to them by Sister Cyril Clare Casey. Then in 1989 she was asked to do a small icon. So she read a book and proceeded! After that she studied and did workshops with a number of iconographers, culminating in a icon pilgrimage to Russia. But she also continues now to study and deepen her love and knowledge of icons.

The inverse perspective traditional in icons is to draw the viewer into the picture rather than just looking into it. Praying with icons is sitting in silence, letting the icon speak to the viewer.

The icon was dedicated at Assumption Church on August 15, 2005 and can be viewed in the newly redecorated lower level of the church.