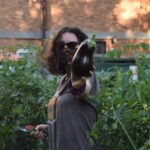 Bobbi Soukup is a learning enthusiast. She has learned how to make bread, sausage, and croissants, and six years ago she decided to learn how to grow her own food. Bobbi says it’s fascinating to see the disconnect between what people eat and how it grows. One time she was walking around town with a brussel sprout stalk from a farmers’ market, and strangers kept stopping to ask her what it was.   “People don’t know where their food comes from, much less how it looks,” she says. In the Celeste’s Dream Community Garden, on the other hand, gardeners start vegetables from seed and tend them through the harvest season. This growing season, Bobbi is interested in bolstering the garden’s seed-collecting efforts, which would “close the loop” in the gardening process.      Bobbi had some experience gardening on her own before but did not have too much success. Through online research, she stumbled upon Celeste’s Dream Community Garden, and was intrigued by its collective nature. All the other community gardens she saw were divided into individual plots and separately maintained, which Bobbi found intimidating. Celeste’s Dream Community Garden was unique.   “Where else have you ever seen this,” asks Bobbi, “(a garden) where we plan together, win and lose together?” Now, Bobbi sees community as a central aspect of the garden.   “We all bring something to the table,” she says.