An immigrant from Togo is working toward his master’s degree. A woman from Somalia will soon begin culinary arts school. A mother from Mexico now feels empowered to speak up for herself. 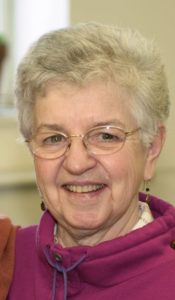 Sister Agnes Foley couldn’t be more proud of them, and the thousands of other immigrants who are able to chase their dreams thanks to Learning in Style. After 23 years, Foley has retired from the Twin Cities program she founded that stresses education to empower adult immigrants.

“Everyday I come into (Learning in Style), I walk into a different world. I mean you open this door and people are here from all over the world, happy and working,” said Foley of the Sisters of St. Joseph of Carondelet in St. Paul. Leaving that atmosphere will be the most difficult part, she said before her retirement last week.

Learning in Style was started on 1994 out of St. Stephen’s Parish in South Minneapolis. Foley and three other sisters were the first teachers. The other sisters had backgrounds in teaching English, and Foley had math experience. There were 35 students.

Word of mouth from students helped the program grow.

It now has about 400 students and operates at a larger location on Nicollet Avenue in Minneapolis. In all, more than 5,000 people have benefited from the program. And the staff has grown to about 20, according to Ann Thompson, communications director for the Sisters of St. Joseph of Carondelet and Consociates.

Courses focus on math, English, citizenship and computer skills. Emphasis is placed on creating a supportive and respectful environment open to all.

It is not just their professional lives but the successes in the students’ social and personal lives that Foley takes pride in.

Foley is no stranger to the immigrant story. She is a first-generation American.

She relates to the struggles of today’s immigrants because her parents came from Ireland for some of the same reasons, she said.

“They left (Ireland) in great poverty. They didn’t come here because they didn’t like their country or their parents. … There was need,” Foley said. It’s the same story as many others.

She grew up in St. Paul’s Frogtown neighborhood, which at the time was filled with German, Polish and Irish immigrants.

She attended private Catholic schools and had seen nuns throughout her childhood helping others. She knew it was her own calling and became a sister at age 18.

Foley plans to spend time with friends and family — one sister and a large extended family — now that she is retired. She will also keep up with her gardening.

She won’t venture too far from the Learning in Style program. While she is retiring from her role as director, she will remain in charge of its finances. Martha Nemesi, who started as a volunteer and has spent the past year as director-in-training, will take over.

Learning in Style has been a part of the Minneapolis Public School Consortium of Adult Basic Education since 1999. Foley hopes that it will develop more connections with colleges and employers.

“I see us as continuing to be in this neighborhood and making it better,” she said.

The Learning in Style school is located at 2200 Nicollet Ave. S, Minneapolis. It is open Monday-Thursday, 9 a.m. to 4 p.m. For more information go to learninginstyleschool.com.