Current 2021 Advocacy Opportunities with the CSJs:

The Sisters of St. Joseph and CSSJ Federation urges support of the “For the People Act,” S.1.  Learn more about For the People Act and the CSJ advocacy actions. This legislation has passed in the U.S. House of Representatives. This bill addresses election reform, making it easier to vote, ending the dominance of big money in our politics and ensuring public officials work for the public interest.  Visit this page for more information and to use the new CSJ tool to make it easy for you to ask your U.S. Senator to support S.1.

Asking your state elected officials to support HF12/SF491.  This legislation supports the continuation of Minnesota’s eviction moratorium/suspension upon the conclusion of the pandemic’s peacetime emergency.  By allow time to develop an off-ramp for both tenants and landlords with the continued moratorium and emergency housing assistance grants, we can help things to return to “normal” by helping vulnerable Minnesotans at risk of losing their housing.

We encourage you to take time in the coming week to call or email your elected Senator and Representative at the Minnesota State Capitol to ask them to support HF553/SF519 which will allow individuals recently released from incarceration to be more successful in their re-entry to the community.

Contact your MN State Senator and MN State Representative asking them to support Senate File 455 and House File 315 and the $15 million in bonding for emergency shelter services.

NOTE:  Find out and confirm the contact emails and phone numbers for your current state legislators at WHO REPRESENTS ME in MINNESOTA.

Highlights of Past Actions

Thank you for your advocacy efforts with us including some of our past actions on: 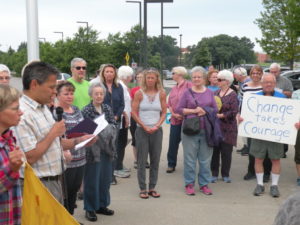 The U.S. Federation of the Sisters of St. Joseph have been and continue to raise our voices for timely COVID relief for our most vulnerable dear neighbors.

The Sisters of St. Joseph of Carondelet continues to collectively reach out to our U.S. Senators against racism and police violence. There has been little movement in the U.S. Congress for Reform of Policing, but there are merits to portions of legislation in the 2020 Justice in Policing Act and the2020 Justice Act.

The CSJ Community seeks bi-partisan legislation to dismantle discrimination and racism, reform policing, and dismantle interlocking systems of oppression.  We invite you to act by calling your elected representatives in Congress asking for their support for Reform of Policing.