The Native American Awareness Working Group together with the CSJ Confronting Whiteness & Racism Working Group, Legislative Advocacy Partners and along with Minnesota Representative Mary Kunesh-Podein encourage you to raise your voices with our U.S. Senators from Minnesota on behalf of the Mashpee Wampanoag Peoples.

You can take the following action step:

Call Senators AMY KLOBUCHAR and TINA SMITH, and ask them as their constituents constituent, and on behalf of the Mashpee Wampanoag peoples and all Native people including the Dakota, Anishinaabe and all tribal communities in Minnesota, to support S.2808 (H.R. 375) – Mashpee Wampanoag Tribe Reservation Reaffirmation Act. 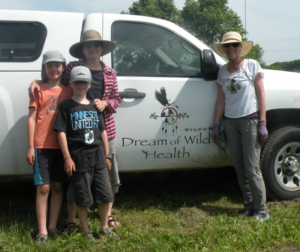 Native American Awareness Working Group is very excited that Hope Flanagan was recently highlighted in local media for the great work of Dream of Wild Health.

Stay tuned, but the Native American Awareness Working Group members hope to find simple and safe ways to volunteer this coming summer during the COVID-19 crisis at the Dream of Wild Health Farm.  Dream of Wild Health (DOWH) is a local, intertribal non-profit that owns a 10-acre farm in Hugo, MN, providing educational programs that reconnect the urban Native American community with traditional Native plants and their culinary, medicinal and spiritual use.  The CSJ St. Paul Province has had a longstanding relationship with the founders and leaders of DOWH, as friends, advocates, volunteers and donors.  Watch for more information or contact the Justice Office. 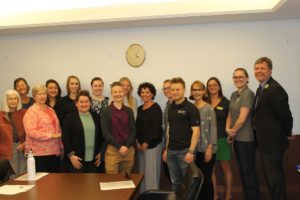 Members of the Native American Awareness Working Group together with St. Kate’s masters and doctoral students and faculty visited with Rep. Mary Kunesh-Podein at the MN Capitol to support legislation creating a state Task Force on Missing and Murdered Indigenous Women.  This engaging visit with a St. Kate’s Alum was one of a variety of ways the group supported systemic change through advocacy action this past legislative session.  Minnesota ranks 9th in the country for the highest number of murdered indigenous women. Native Women are more than 10 times more likely than the general U.S. population to be murdered according to a U.S. Department of Justice study.  This legislation was a very simple and minimal budget bill to create a MN State Task Force to collect data and better understand this issue by compiling reliable statistics and addressing the violence impacting Native Women in Minnesota.  It is a practical way to support and stand in solidarity with our Indigenous Sisters in Minnesota.

The Native American Awareness (NAA) Working Group aims at raising consciousness and increasing knowledge about Native American culture, especially in Minnesota.  We study the history and special challenges experienced by Indians who remain marginalized in contemporary society. We share what we learn with each other, with other Sisters, Consociates, and interested others and take action when appropriate.

To carry out this mission, the Native American Awareness (NAA) Working Group hopes to:

A Call to Action from a Woman of Justice and Joy

Minnesota Supreme Court Justice Anne McKeig joined nearly 200 community members for a rich evening of conversation, ritual, music, justice, and indigenous food on February 8th hosted by the Native American Awareness working group of the CSJ Justice Commission, the church of Gichitwaa Kateri, and Wisdom Ways.  The room was filled with Larry and Claire Martin’s gifted flute music and singing along with the smell of sage carried by Native youth for smudging to purify and cleanse the space.  As Shawn Phillips from Gichitwaa Kateri said, “Let the sage wash over us and cleanse us.”  Larry and Claire Martin, La Courte Oreilles Nation gifted us with flute music and singing of “The Pipe-filling Song” and “The Song of Four Directions” in the Ojibwe language.  Maureen Headbird, a member of Leech Lake Nation, pipe carrier and Kateri trustee, blessed the group and opened our evening with a Pipe Ceremony.