Witnessing Compassion Film Series: The Passion of Joan of Arc 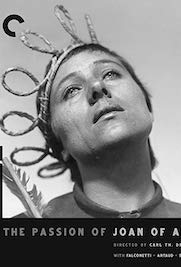 Filmed in 1928, this silent film directed by Danish Carl Dreyer features actor Renee Jeanne Falconetti in her only film role. The story of the French saint Joan of Arc is known to many: her life as a shepherd girl, listening to the voices of angels and saints, following their directive (minus clerical intervention) at the age of 17 to lead the French army to victory, getting caught up in the political and institutional church intrigues of her time, being burned at the stake as a heretic at 19 on May 30, 1431.

She was canonized as a saint nearly 500 years later. The script follows closely the actual transcripts from her trial. Her story evokes OUR compassion as we reflect on this young woman whose fidelity to her “voices” and to her God cost her her life.